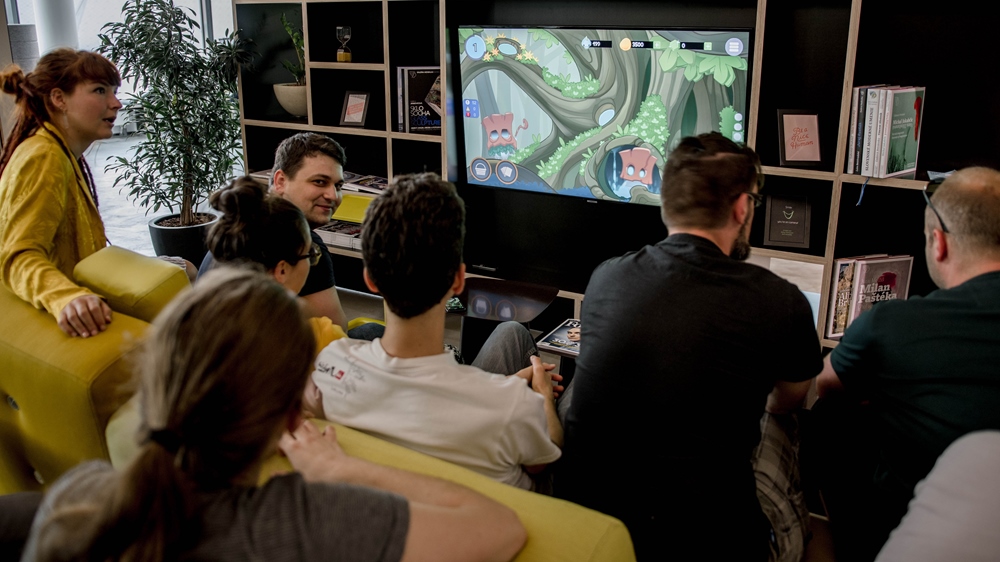 Fortunately, the clever young talents who want to create games are being born at a really fast pace. That is one of the reasons why we decided to interview co-founders of the Tater Games studio - one of the newcomers in our country, but also interesting for its specific corporate culture. They support both creativity and the functioning of the whole team. However, in our interview they told us much more. Although only a few months have passed since the studio was established, they are finishing their first game, so we also spoke about their future plans.

Could you introduce yourself and your studio?

Gabriel Brockman - Hello, my name is Gabriel and I primarily direct creativity and exploration.

Marián Kuruc - Hey, I’m Marian and I’m mostly responsible for game direction. I oversee the market research and design of all current and future games.

Gabriel Brockman - In addition to our chief duties, Marian and I handle every other aspect of running our talent-driven studio, from HR to bookkeeping and financial planning.

Marián Kuruc - Tater Games is a small game development studio established in Bratislava, around March 2019. We are already in the soft launch phase of our first title, Nunu Spirits, a rescue puzzle game for iOS and Android. We love classical games that draw heavily on nostalgia and have a special place in our hearts for local multiplayer games (especially co-op).

How did you manage to complete the main skeleton of the studio with a member from a different country?

Marián Kuruc - Haha. It wasn’t so bad...only a few extra bureaucratic hoops to jump through. We are a very internationally minded company; we actually have 3 people from outside Slovakia on board. We even convinced a Slovak artist to come back from Spain to join us. I’d say it’s working out great for us - since onboarding talent from foreign countries is not really an issue. And there is so much talent out there!

Gabriel Brockman - We take steps to ensure our company culture is as open as possible. English is a very tech-friendly language so that was a natural choice, even though I do speak a bit of Slovak. But Marian is right, navigating all of the bureaucracy and whatnot can be very intimidating. It’s important to have a partner that has your back. If I were to offer advice to other expats or Slovak natives looking to start something, I would highly recommend international team up. I think it opens doors that might otherwise not exist. 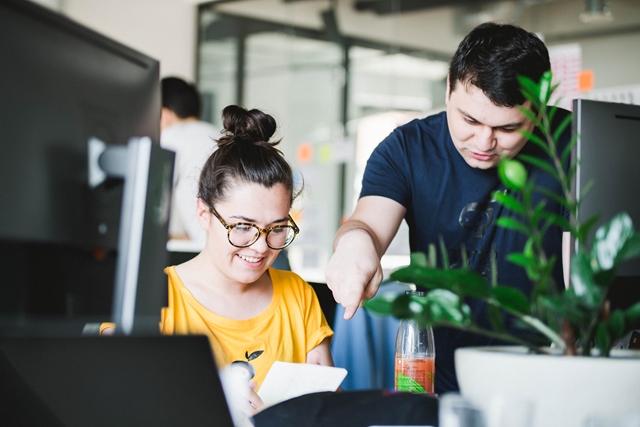 We know you want to be different from standard large studios in many ways. So can you tell us what are the main things that make you different?

Gabriel Brockman - We spent a ton of time discussing this in the early days.

Marián Kuruc - Our first talks, even before Tater Games was an official thing, were about what didn’t work for us in the past but we quickly realized that with a few simple tweaks we could build a studio that would champion our standards, not just for us as owners but for every single person that would join us.

Gabriel Brockman - To start we would put talent first. Meaning the people that work on the game must all be creatives, whether they are code wizards, or they have mastered the arts of pixels and polygons. Furthermore, if talent is the most essential element, we should reward talent accordingly. So, we are looking at revenue sharing models and bonus salaries based on project success, not time with the company or manager level status. We don’t even have managers in the traditional sense.

Marián Kuruc - Our “managers” are actually at the bottom of the hierarchy. Their primary purpose is to support and elevate our talent, not mandate and dictate what to do and how to do it. It’s more about managing all that creativity and channeling it into meaningful tasks and a singular vision that ultimately moves the project forward.

Gabriel Brockman - It takes a lot of work to make sure everyone on the team operates in this way but it significantly reduces the bureaucracy and further eliminates the need for traditional managers that may or may not have any idea what a given task requires. The person responsible for fulfilling the task is also the one making sure the task is achievable and necessary for the game.

Marián Kuruc - And it’s more fun to build games in this creative environment but, to keep the creative train on track we also need something objective. For this we use data. First, we make a hypothesis/design and prototype it quickly. After that we test it by having players play it, collect and analyze the data and learn from it. Finally, it’s back to design and the whole process starts again.

Gabriel Brockman - In short, we put our talent first, we mitigate bureaucracy with an inverted management hierarchy and use data to inform our agile, iterative process.

In the past, you worked for a long time at the Pixel Federation, how do you look back at your work in this studio?

Gabriel Brockman - For me, it was the first time I worked on games in a professional capacity. I was able to grow quite fast and I had the opportunity to tackle a huge range of tasks and projects. By the end of my tenure there I felt comfortable jumping in on any project, at any stage of production, feeling confident I could make a positive impact.

Marián Kuruc - I worked on a few games before joining Pixel, but it was the first time I really saw how a larger studio operates on a daily basis. Over the years I learned a lot about game design by working on most of the new projects the studio had at the time - Galactic Junk League, Button Blast, Trainstation 2… And then it was time for me to give back, so I spent significant time mentoring the Pixel younglings. 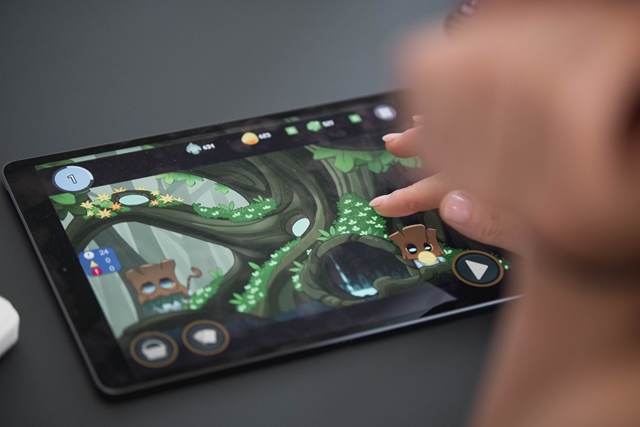 Why did you decide to leave Pixel and go your own way?

Gabriel Brockman - I like new challenges. I’ve had over 30 different job titles so far. I got to a point where I wanted to take my game designs in a different direction and it’s quite difficult to alter the direction of such a big ship. So I left, failed a start-up, tried something else (branding) for a bit. All the while intending to return to games.

Marián Kuruc - I wanted to move forward professionally, to do more than just code or design a game. Game development is an incredibly complex process and I felt I could contribute more, start a new project with a more iterative approach. But that kind of thing is hard to do in such a large and established studio.

You are currently working on a mobile game called Nunu Spirits, which looks interesting. At the same time, the gameplay looks like the Lemmings series. Aren't you afraid that this similarity might be bad for you?

Marián Kuruc - I would actually say the opposite. A lot of people really liked the Lemmings in the 90s, we certainly did. That nostalgia is a big reason why we make games in the first place.

Gabriel Brockman - Also, mechanically and artistically speaking, Nunu Spirits is significantly unique. Our game and the way our Nunu Spirits behave wasn’t pulled from Lemmings, it evolved over time.

The early access version of your game is currently available for free. Can you tell us more about the development? Where was the idea was born and how long have you been working on it, what kind of feedback have you received from players? When do you plan to release the full version and how will it differ from the currently available one?

Marián Kuruc - The idea for the game came through an iterative process, as a lot of things in our studio have. The current “lemmings-esque” iteration is based on the 11th iteration of the game.

Gabriel Brockman - The first iteration involved goblins and was a local co-op game. It has been to 3D and back a couple times. The last time it switched we really liked the idea that the Seedling (unit that needs rescuing) would cling to the surface of the path and could even walk upside down. The rescue mechanic was a carryover from the game’s brief time as an inverted tower defense game, back when beavers were hunting trees with chainsaws.

Marián Kuruc - As for player feedback, it has been very positive so far. We are pretty happy with the state of the game right now. Sure, there are a few kinks, but I don’t expect a lot of major changes before we release it into the world. As for the release date? Soon, but you can already get it on iOS or Android, if you live in a few specific countries (CZ, SK, UK). It’s also not just a demo version with a full release coming. The whole game is live…just needs some polish. And, as with most mobile games, more content will be added over time. 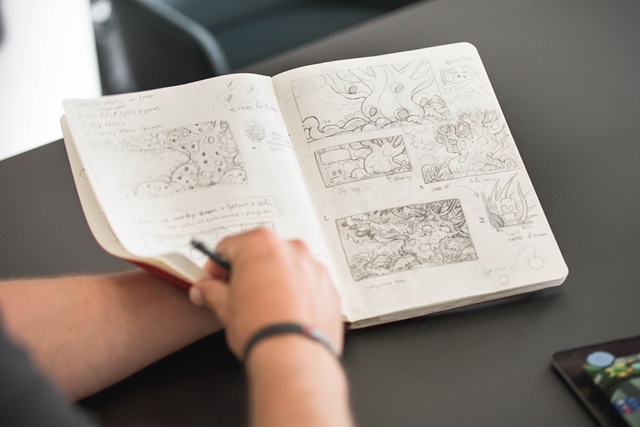 Is this the only game you're currently working on?

Marián Kuruc - We are currently prototyping various concepts for our second game but haven’t decided yet which way to go. As we mentioned before, it all depends on the data - what game mechanics players like the most, what art style, and whether it is viable for the current market.

Gabriel Brockman - We are already excited about the first prototypes but it’s a bit early to start talking it up. With our penchant for short development cycles I think we’ll have much more to share in Q1 of 2020.

Do you already have plans for the next game/s or do you want to devote yourself to Nunu Spirits, bringing more content?

Marián Kuruc - It all depends on the success of our first game.

Gabriel Brockman - Ideally NS keeps performing well and we can continue to dedicate manpower to bring more content, but that doesn’t mean we won’t pursue new games. We have designed the studio to support multiple small teams working at the same time.

Do you only want to stay on mobile devices, or are you planning to come up with game console games later? For example, Nintendo Switch.

Marián Kuruc - We plan to pursue multiple platforms; Switch has been very welcoming of indies (much like DS was back in the day). Certain aspects of Steam/Epic like distribution could pull us towards PC someday, with the right publisher...

We also have a bunch of “just for fun” ideas, like game-jamming up an arcade version of Nunu Spirits on a DIY arcade machine.

Gabriel Brockman - Oh, we are SO doing that. That’s a promise. Haha.