Mythgard is a free-to-play competitive collectible card game available on Steam, iOS and Google Play, where players battle it out in a world where myth exists alongside modern technology. The game id developed by Rhino Games, and we had an opportunity to talk to Peter Hu, co-founder of Rhino Games, Marvel Heroes designer and Diablo 2 programmer and engineer..

You worked on Diablo 2, Marvel Heroes and now on the card game Mythgard. How has the gaming market evolved over the years?

I actually started my career working on Army Men at 3do, and also worked on Hellgate:London and Torchlight I & II in between Diablo 2 and Marvel Heroes, so I’ve been on the “inside”, so to speak, for over 25 years now. The market has grown tremendously during that time, internationalized, and diversified, along with the internet and society at large. It went from trading games in baggies at local comic book and hobbyist stores, to boxes at legitimate retail stores, to companies like Blockbuster trying to figure out how to rent games out, to the vast majority of games being distributed via online platforms. It went from terminal games, to PC and dedicated consoles (the first of which didn’t even have cartridges and just had one or a handful of games preinstalled), to dedicated handheld devices, to phones and VR and AR. The gaming devices themselves improved tremendously over just 30 years - my first computer had less than 4 kilobytes of RAM and my current one has 16 GB - that’s a 4 million times increase! The displays have gone from text only, to 40x40 and 16 colors, to 4K UHD and beyond. They’ve changed from single player experiences to massive worlds.

So a lot of things have improved, but not everything. The shift to ftp is not an improvement in my opinion, and is dictated by market dynamics that are not in developer control.

That said, games as a form of human expression, both from the creator side and the player side, is a wonderfully dynamic space. I love that the demographics of gaming has shifted to a much wider base, and am really really excited to see where it goes, because there’s just so much opportunity to improve, to expand, and to create. I think, if we as a species can get our act together and survive, if we can progress in the more hopeful direction of a society that is less bound by scarcity, games will become an ever bigger proportion of human activity, expression, and socialization, and I’m really excited and hopeful about that.

How is Mythgard different from other similar games?

Mythgard is an attempt to take something that was being done okay, and to do it really really well. I think it’s an incredibly ambitious project (especially given the team size). We really innovated in the design space to address specific problems we saw with agency, as well as both the limitations of taking a genre that was originally designed for tabletop into the digital space.

Taking such a small team, and trying to create a project that competes head-to-head with giant established franchises with enormous resources, is such a David-vs-Goliath story that it hits me emotionally to even contemplate. Mythgard is full of heart and passion, in a space that is, frankly, kind of dry. I think that’s the biggest difference. I think (hope) that anyone who tries it will see that - that quest for perfection against overwhelming odds.

The game uses different settings as well as different characters. Why did you choose to use such combinations?

It’s just kind of an interesting story, one that we wanted to tell. Part of it of course is that we felt like we needed to differentiate from existing products, and the hope that we’d find our own audience.

However, if your question is why we didn’t use an established IP, then that’s mostly because we never met an IP holder that was interested in partnering with us. If Disney had been like, “Hey, we want you guys to make a Star Wars CCG”, we would’ve been pretty keen to have that discussion.

However, you also use such combinations directly in the gameplay, where different factions and classes are combined. How did you manage to balance these things?

Balance is funny. We do it pretty intuitively, by feel. For us, it’s not a mathematical thing, because so much of the joy of games is in exploring those outliers, the unevenness of things so to speak, whether it’s a RTS or an ARPG or a CCG. We use data and maths of course, but that’s not the heart of it. Rather, we’re constantly looking to find where the fun is. Having a large set of combinatoric abilities is incredibly hard to balance, but it’s incredibly fun.

It helps that our technology is so good though - being able to live-tune the cards to sand down the edges are too rough enables us to do things that we’d otherwise not dare to do.

You are offering a giveaway for the majority of your rare and mythic card pool. What will it bring to the players and what does it mean for the game itself?

Firstly, I hope it encourages players who have established collections in other games to give Mythgard a shot. Secondly, I’m not really a fan of the ftp model as a general thing, so I’m interested in seeing where this takes us. I hope people try the game, see what’s special about it, see the massive opportunities in deck-building and player agency, and fall in love with it. I don’t know if it’ll work out or not for our finances, we’ll have to see about that, but the primary goal is to share the game with a bigger audience if we can. 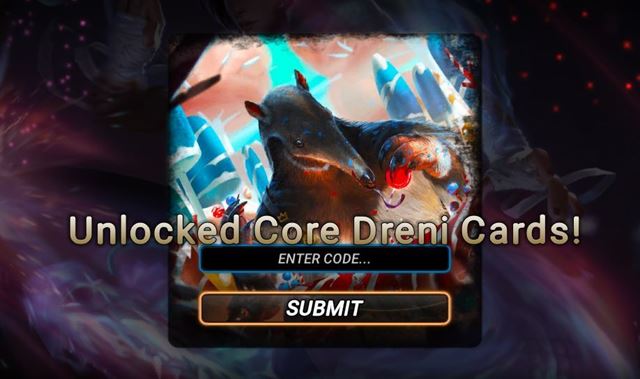 You can find the giveaway HERE (at the bottom of the Slovak version of this interview). The code itself will provide people that use the key 20 common cards, 20 uncommons, 15 rares and 17 mythics, from the Dreni/green card faction. Green tends to be a "tricks" or manipulation focused color (Traitorous Murmur, Marching Orders, Rewind Hex, Double Think) and is spell-focused (Sablewing Zira, Bela, Spellflux Cauldron). Finally, Green uses its boneyard as a resource (Wake the Bones, Raid the Tombs, Boneyard Abomination, Hopeless Necromantic, Born Again, etc).

On all platforms apart from Apple iOS, you can go to the Store page in the main menu and scroll to the right to Redeem. Once claimed on any platform, the collection is available for all platforms.